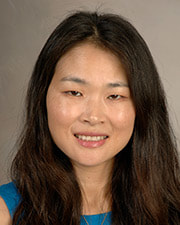 Assistant Professor, Vivian L. Smith Department of Neurosurgery
Education & Training
Graduate School
Microbiology, Dongguk University, Seoul, Korea
Doctorate
Neuroendocrinology/Pharmacology, School of Medicine, Kyunghee University, Seoul, KoreaDr. Kim received her Ph.D at Kyung Hee University in Seoul, Korea. During her Ph.D, she focused on the regulation of growth hormone axis in endocrine disorders such as acromegaly and diabetes. With the background in neuroendocrinology, she joined Dr. Cho lab at Burke Medical Research Institute for a postdoctoral training and was promoted as an instructor in Feil Family Brain and Mind Research institute at Weill Cornell Medicine in 2013.
During the training period, Dr. Kim acquired expertise in vivo physiology and pathology of stroke. Her studies have been focused on the impact of comorbid conditions in stroke pathophysiology. She defined the effect of hyperlipidemia and diabetes on acute stroke outcomes and the underlying mechanisms governing the comorbidity stroke. She was also involved in studying the importance of synaptic plasticity for long-term functional recovery after stroke and the effect of genetics using animal model of human BDNF polymorphism.
Her works have been published in highly regarded journals including Annals of Neurology, Journal of Neuroscience, and Journal of Cerebral Blood Flow and Metabolism. In 2017, Dr. Kim joined the Vivian L. Smith Department of Neurosurgery at University of Texas Health Science Center at Houston as an assistant professor.